Generally not pretty. I know mine sure aren’t. But I’m proud to say my last epic meltdown was over five years ago.

Sometimes when I think about how long it’s been, I feel like an addict. An alcoholic measures their sobriety by the time elapsed since their last drink; a gambler defines success by time since their last bet.

Me? It’s the distance between meltdowns.

This isn’t to say I haven’t gotten angry or sad or disappointed, but rather that when faced with those instances, I haven’t lost my self-control. I’ve cried plenty of tears and spoken harsh words, but I didn’t cross the crazy line. The word vomit, say anything that comes to mind, shrieking, out-of-control, hitting or throwing things, ‘I don’t care what happens after this’ kind of crazy.

Oh don’t act so surprised! We ALL have moments we aren’t proud of, but if we bring them into the light and invite solutions and accountability, we stand a much better chance of preventing future occurrences. I’m far more concerned with making change and improving the standard than hiding behind a facade.

Five years is a big deal. 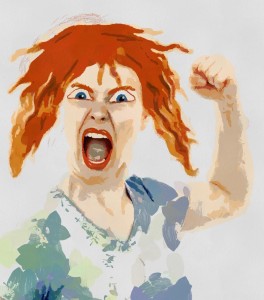 Everyone has their personal triggers and I’m certainly no exception. My last episode was brought on by rage. I was fuming mad and I let my temper get the best of me. While on the phone with my ex-husband, I let loose. With a booming, bellowing voice, I issued a slew of pointed threats, dusted with salty language and disdain. Ranting and raving for a good five minutes, I’m sure businesses all around heard my tirade. I was pacing in the parking lot, waving my hands wildly, and screaming in my phone. I must have looked like a complete lunatic. But it didn’t matter.

And I just didn’t care.

Composure and restraint were nowhere to be found. My anger was righteous but my delivery was not. I wore my wrath like a badge of honor. I was proud of the tongue-lashing I delivered. It took me almost an hour to calm down and stop shaking, and even then, I was too upset to understand the magnitude of my actions.

As time went on, however, the reality of my unhealthy behavior became apparent and wore on me. I really needed to make a change.

I had traded my witness and call to obedience for a moment of selfish satisfaction, accomplishing nothing in the process except generating a mountain of guilt and regret.

Confronting the truth didn’t make me any less angry at my ex-husband, but it sure made me disappointed in myself. I knew I didn’t want to feel this way ever again. The time between meltdowns had increased tenfold, but that wasn’t enough. My goal became to make the last one my final one. In order to do this, though, I needed an intentional, disciplined game plan, so I devised the following:

STOP – When you feel your blood pressure rising and your defense mechanisms kick in, stop whatever you are doing and take a step back. Even an actual physical step if necessary. Space is a great opportunity to simmer down and reevaluate.

SHUT UP – Until you figure out what you are going to say, keep your lips sealed. It’s more important to use constructive words that may actually help rather than to allow damaging words to fall from your lips. You cannot ‘un-say’ what is said, so don’t say it to begin with. Bite your tongue, literally if you must, but shhhhh!

PRAY – Okay, so I’m not going to lie. In the seconds right before an epic meltdown, praying isn’t generally what comes to mind. At least not for me. Why is the most helpful solution sometimes the one thought about last? Gulp…. But it doesn’t have to be. Commit to prayer, even in the midst of a challenging moment, and seek God’s wisdom and guidance. Use His judgement, not yours.

LOOK AHEAD – Glimpse past the heat of the moment and consider how your actions might affect tomorrow, next week, next year. The negative fallout from bad choices can exponentially snowball and cause significant damage and heartache. Heck, it could even land you in jail. Don’t make a bad situation worse. Evaluate the impact.

PRACTICE SELFLESSNESS – Think about those around you and the people you value. How will your actions impact those you love and care about? An ill-fated moment can ripple out and affect family and friends several layers deep. Are you risking an important relationship or compromising a friendship? Consider others before yourself.

KEEP YOUR WITNESS INTACT – Logically, there’s no comparison between keeping your witness and delivering a good jab or one-two punch. While the latter may feel good, as a Christian, you know the importance of your witness. In the heat of the moment, however, are you really going to be thinking with your head? Not necessarily! So think about it NOW, before you’re confronted with the choice. Proper Planning  Prevents Poor Performance. Sure, all of us can get caught off-guard, but drawing healthy personal boundary lines in advance will go a long way in preserving your witness.

SHINE HIS LIGHT – Our entire purpose on earth is to bring glory to God’s Kingdom. Contrary to popular opinion, we aren’t here to satisfy any self-driven needs. Our human sin nature doesn’t make it easy to put God’s plan before our own, but just because it isn’t easy, doesn’t mean it isn’t right. Consider if your actions will bring glory to His Kingdom, and if not, scrap em’!

The ‘Badge of Honor’ I wore for how viciously I could slice and dice someone with my tongue has now been replaced with a ‘Badge of Honor for Time Since my Last Epic Meltdown.’ And yes, I wear it proudly! The benefits?

But, as with any other addict, I know I am susceptible to relapse. While I celebrate my triumph, I don’t forget my charge.  My name is Sherry and I’m a Meltdown-aholic.  The reality of this is sobering, but I’d rather be aware and in charge than sold-out to future failure.

Don’t let a bad moment overrun your better judgment. Declutter epic meltdowns before they start and begin counting your days of victory. Join me and wear your ‘Badge of Honor’ loud and proud!