God Wants To Be Your Friend

At Declutter Now!, we always LOVE IT when Carrie Daws stops by. Today she sheds some light on what it means to be friends with God! Like what you read? Be sure to check out more from Carrie by CLICKING HERE.

Lindon and Sherry have done a great job through Declutter Now! of leading us through the biblical reasons and the practical ways to declutter our homes and lives. Losing the leeches, divorcing debt, and stopping mind-numbing stress are so critical to living the abundant life God wants for us.

But let’s not stop there! God wants even more for you. As part of this abundant life, He wants to be your friend.

Now before anyone jumps off the deep end, let’s define that. When the Bible talks about Abraham being a friend of God (Isaiah 41:8, James 2:23) or Jesus calls his disciples friends (John 15:15), the words used conveyed a level of expectation that we don’t necessarily add to our modern friendships.

A Closer Look at Biblical Friendship 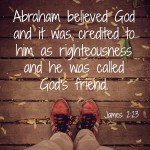 And the scripture was fulfilled that says, “Abraham believed God, and it was credited to him as righteousness, and he was called God’s friend” (New International Version).

That verse contains some big words with incredible meanings behind them. So let’s take them in the order they appear.

Believe is a big word with multiple meanings. For example, I believe my desk chair will support my weight to the point that I will sit down in it. On the other hand, I also believe my brother will show up for our lunch date, but I am not completely confident he will show up on time. The difference is how much confidence or trust you have in the object of your belief following through.

In this verse, the word used means to completely trust with everything you have, down to the core of your inner being. The Greek-English Lexicon of the New Testament says that when translating the original word, “it would be wrong to select a term which would mean merely ‘reliance’ or ‘dependency’ or even ‘confidence,’ for there should also be a significant measure of ‘belief,’ since real trust, confidence, and reliance can only be placed in someone who is believed to have the qualities attributed to such a person.1

It was credited to him as righteousness.

The original word for credited here basically means just what we think of: to add to someone’s account. But righteousness! Now that’s a rich word that could be it’s own blog post.

Have you ever really thought about what righteousness means? Before looking it up one day, I hadn’t. I knew God expected it of us, and I knew God was righteous. But past that I wouldn’t have been able to give a workable definition.

Here’s what Baker Encyclopedia of the Bible has to say:

And the best part of all this? Righteous is a gift from God! Romans 3:22 says, “This righteousness from God comes through faith in Jesus Christ to all who believe.” Talk about a heavenly fulfillment of God providing everything we need for life and godliness (2 Peter 1:3). 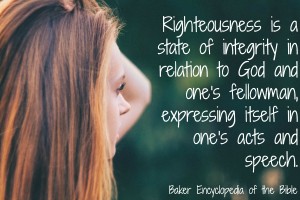 He was called God’s friend

And now we reach the word we wanted. Now that we better understand what kind of belief Abraham had in God, and we understand the gift God bestowed upon him in righteousness, what did their friendship look like? What does it mean to be friends with God?

Friendship as an association is pretty basic. It’s more of knowing who someone is, or having been introduced to them. Think about how many people are on your social media channel that you truly know little about.

Friendship plus loyalty would include work relationships. In the Bible, servants were expected to have a loyalty to the King or to Caesar. If they were found to be disloyal, they were called the antithesis of friends, or enemies of the state. Today, we may have this level of friendship with our country, or difficult family members. I think of siblings growing up together who fight constantly at home, but will defend each other in a school setting.

But it’s the friendship that includes loyalty and affection 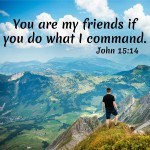 that God seeks with us. Abraham showed he loved God by doing what He said–even when it sounded crazy or illogical (Genesis 12:1-4; 22:1-18). And Jesus affirms that this is what God still wants when He says, “You are my friends if you do what I command” (John 15:14).

Well, that’s all great biblical knowledge, but it means nothing if we don’t do something with it. Decluttering your home and life is great! But God wants more. He wants to delight in you, cherish you, love on you. He wants to be your friend.

Don’t cheat yourself by merely decluttering.